Getting Arrested in Charlottesville

How different are Black and White people treated by our police?

It’s been inspiring to see the world unite in protest against systemic police racism. It’s depressing because our country claims to stand for something better. To make this massive issue feel closer, I analyzed the arrest records from my city’s police department here in Charlottesville, Virginia.

Using population data from the US Census and arrest data reported by the police, I filtered down to only consider individuals identified as Black or White.

The arrest record data includes all of the charges against an individual at their time of arrest. It is common for a single arrest event to have multiple charges associated with it. For an example home burglery there might be two charges: Breaking & Entering and Petty Theft.

This table shows the average number and the maximum number of charges per arrest, broken down by race.

By assessing multiple charges it increases the likelihood that one of them will lead to a conviction at trial. I’m reporting individual charges in this post because I think that is a fair metric to estimate the impact of policing, but I want to be transparent what these numbers represent.

The volume of charges is shocking and the disparity is stark. There have been more charges against Black people (8,883) in the last five years, than there are Black citizens (8,437)!!! I am floored by these numbers, maybe I shouldn’t be because the Bureau of Justic Statistics estimates 1 out of 3 Black men born in America in 2001 will be incarcerated at some point in their lives.

This split in the number of charges between Black and White people is constant since the data begins in 2015. Even as total charges seem to be trending down (the most recent data points as outliers attributed to COVID-19) the disparity remains. 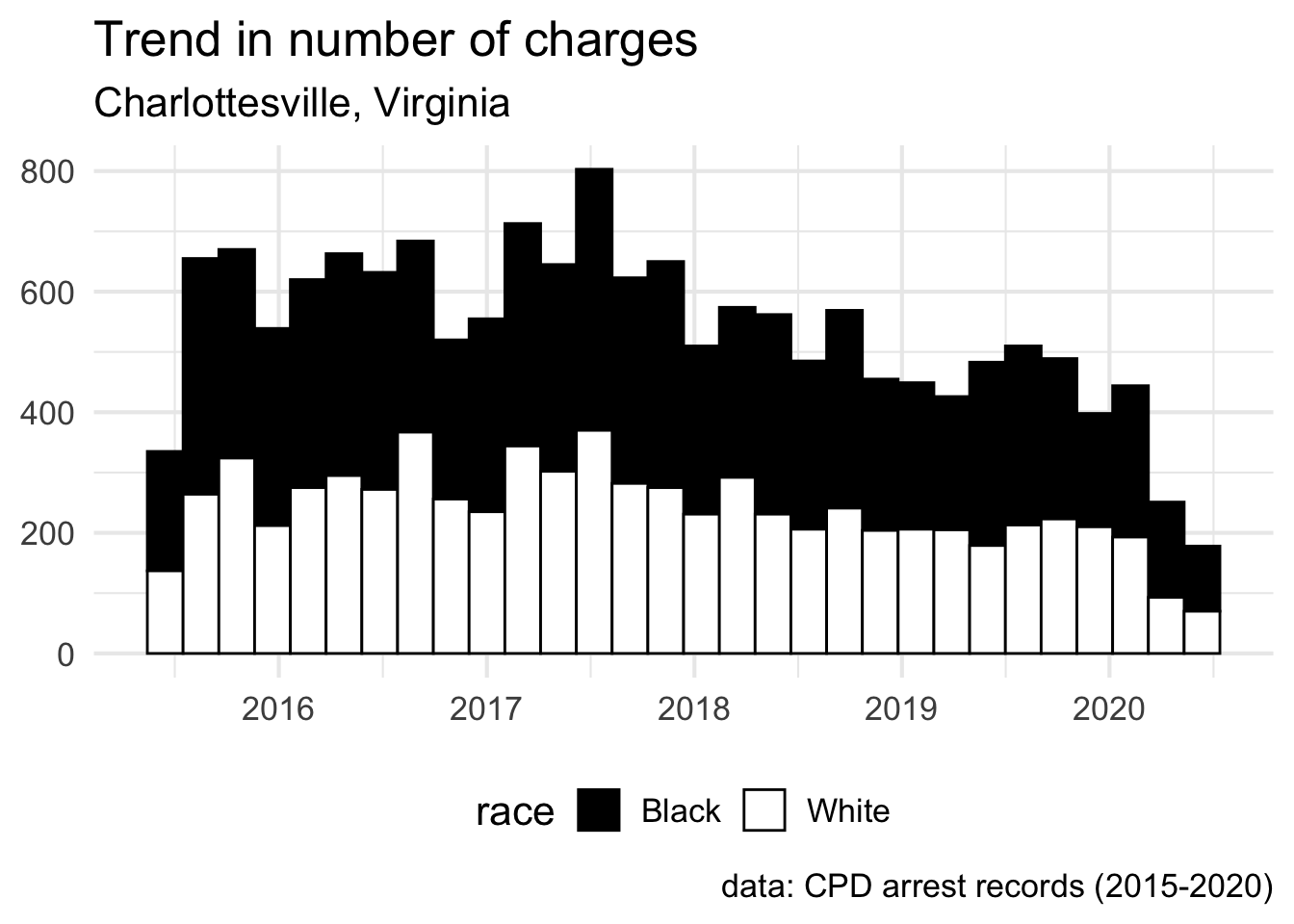 There are 477 unique statutes (laws) represented in these records. So to summarize the general type of charge, I created a new column capturing the first lowercase word of statute’s long form description.

Looking at the top 20 most frequent charges. 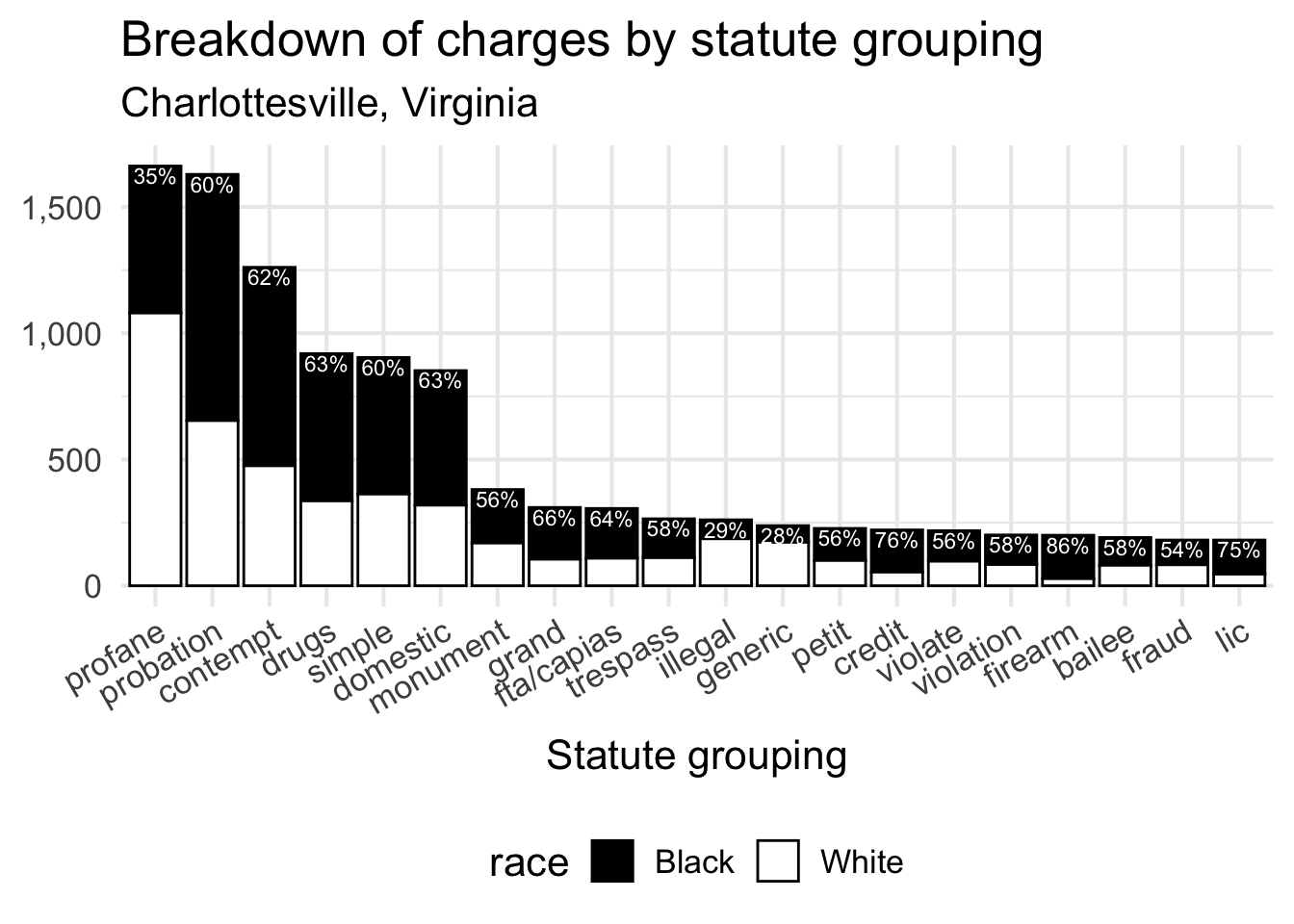 Stark differences between races exists and vary dramatically depending on the statute group. The “firearm” (86%), “credit” (76%), and “lic” (75%) groups are the most biased towards Black people. The “generic” (28%), “illegal” (29%) and “profane” (35%) statues have the smallest fractions of Black people, but all are still biased, remember only 22% of Charlottesville population is Black.

I think it’s insane that “monument” makes the list, considering the neo-nazi rally here 3 years on A12. Most of the “historical” statues in the South were erected during the peak of Jim Crow, they were and are 100% racially motivated symbols.

Notable descriptions that were not immediately apparent for me:

If you want to explore the long form of the statute names for each of the groups use the table’s filters below.

The 16,090 charges in this data set are attributed to 5,775 people, so a lot of individuals have received multiple charges.

Here is table with counts for each statute charged against top 100.

Using “justice” to keep Black people subjugated is an American tradition, and it’s always revolved around minor offense that are disproportionatly enforced. The 13th Amendment explicitly allows slavery when it’s used as criminal punishment and the profiting from unpaid convict labor is still happening in America today.

The Sentencing Project is a great resource to learn more. They curate national and state level statistics on arrests and prison populations in America.

If you have access to similar data for your city, I hope you do something similar. The raw Rmd is here.

It’s easy to ignore injustice if you never see it. But seeing how lopsided the system is can help people understand how big this problem really is and why people are so frustrated when it rears it’s ugly head yet again.

Give your time, money or skills to make America better for our Black citizens. Congregate Charlottesville and Computers4Kids are two local organizations doing good.